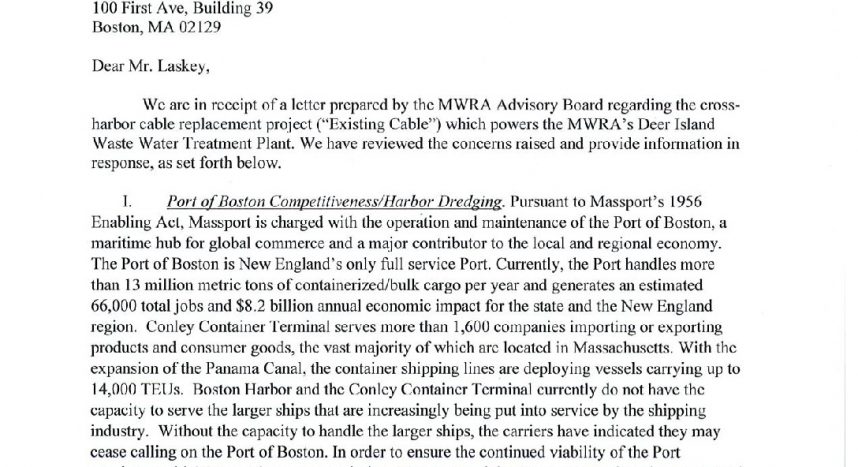 In the Advisory Board’s FY20 Comments & Recommendations, it was recommended that the MWRA engage Massport in discussion on two issues: (1) Massport should rescind the $8 million that was extorted from ratepayers for the HEEC/Eversource Cross-Harbor Cable to go through Conley Terminal, and (2) the MWRA should be charging Massport for the O&M and capital costs of running Wiggins Pump Station at Conley Terminal, so that communities are not paying for Massport’s operations.

The recommendation was followed up, per request, by a letter from the Advisory Board to the MWRA Board of Directors. That letter was redirected to Massport and received a response on June 17, 2019. The letter confirms one of the glaring issues with the $8 million extortion: No appraisal was done to justify this exorbitant cost; it was simply “negotiated” between Massport and HEEC/Eversource, with the latter receiving their standard 9% escalator on top of the cost.

Finally, the response letter from Massport indicates they will be sitting down with the MWRA to discuss the past, current and future costs of running and maintaining the Wiggins Pump Station. The Advisory Board expects a swift resolution to this issue, and will not back down. Next stop: the State House.

Update: you can view our video summary of the issue here.