Communities have a water problem. Is there a win-win solution?

(originally published by the Boston Globe on October 12, 2021 here: https://www.bostonglobe.com/2021/10/12/opinion/communities-have-water-problem-is-there-win-win-solution) 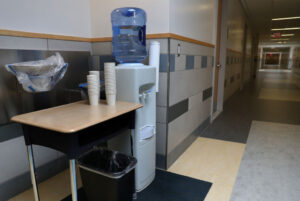 Thanks to widespread water conservation and fixing underground leaks, the Massachusetts Water Resources Authority delivers 40 percent less water from our supplies to municipalities than it did in 1985. This is an environmental success story with an unexpected downside. The MWRA’s reservoirs were so full this summer — helped by all the rain — that the MWRA in July had to release 4 billion gallons over the Wachusett Dam and down the Nashua River.

At the same time, dozens of cities and towns in and near the MWRA service district have discovered that their water supplies are contaminated with toxic “forever chemicals” called PFAS, per- and polyfluoroalkyl substances. It could cost their residents billions of dollars to clean up water supplies and develop safe new sources. But there is a potential win-win solution: Expand access to the MWRA’s abundant, existing supply so residents of PFAS-afflicted communities get safe water while avoiding the need to pay billions of dollars for their own safeguards.

The MWRA Advisory Board — which represents nearly 3 million people in the 60 cities and towns who pay the MWRA for water and sewer services, with a particular focus on trying to keep water and sewer rates as reasonable as possible — is under no illusions this would be quick or easy. Connecting more cities and towns to MWRA drinking water supplies would necessitate building or upgrading many miles of new water mains, pumping stations, and related infrastructure. Some Massachusetts laws and regulations around moving water from one watershed to another may have to be reexamined or reworked to expedite connections for new communities.

But compared with the cost of PFAS filtration and developing new wells, the MWRA solution would be a bargain for many communities affected. That said, as this map shows, there are communities for whom connecting to the MWRA system is not a viable option. For all communities facing a PFAS problem — whether the MWRA is a potential solution or not — adequate funding and support must be made available.

Massachusetts is now sitting on billions in unspent COVID-19 relief funds and will probably win another $8 billion in federal infrastructure spending. Helping communities address their PFAS issues by connecting to the MWRA or developing their own viable solutions would require only a small piece of these funds, which would not take away from addressing other critical infrastructure needs.

Governor Charlie Baker, the Legislature, and state and local policy makers and stakeholders should consider using some of these funds to connect communities affected by the PFAS crisis to the MWRA water system. Investing in water infrastructure pays huge dividends in public health, economic development, and economic impact: Every $1 invested in water infrastructure generates between $2 and $14 in local and state tax revenues, according to the Collins Center at the University of Massachusetts Boston. The study also found that water and sewer projects create jobs as well — both construction jobs while the infrastructure is being built, and new permanent local jobs as increased water access leads to economic growth.

Going back to the 1800s, our many-times-great grandparents got it right when it came to providing safe, reliable drinking water supplies for Eastern Massachusetts — connecting Boston to Lake Cochituate in the mid-1800s, developing the Sudbury Reservoir in 1878, the Wachusett Reservoir in 1897, and the Quabbin Reservoir in the 1930s and ’40s. They planned and built a regional water system to serve a growing Greater Boston. Today, 47 communities receive the best drinking water in the country from one of the best-run utilities in the country.

Going forward, we can build on their foresight and connect more communities to the MWRA drinking water system — a win for residents to secure safe and healthy water, and potentially a financial win for customers in the 47 communities already served as the cost of operating the MWRA’s water system gets spread across a larger number of ratepayers, lowering average bills.

This solution is good for communities. Good for the environment. Good for economic growth. And good for MWRA ratepayers. Our forebears got it right in the 19th century. We must do the same in the 21st century.

Joe Favaloro is executive director for the MWRA Advisory Board.