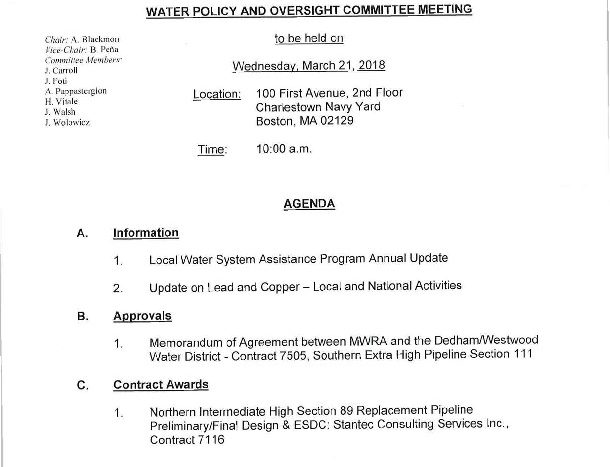 Just a quick recap of the highlights of the MWRA Board of Directors meeting on March 21, 2018. For our live-Tweets of the committee meetings and full meeting, search for “#MWRABOD” on Twitter.

The MWRA Board of Directors approved the creation of a new position – the Director of Tunnel Redundancy Program with a salary range of $129,038 – $180,970.

In last year’s review, the Advisory Board recommended using a Program Management Division (PMD) approach similar to the one used for the Boston Harbor Project to manage the up to $2 billion Metropolitan Tunnel Redundancy Project. This approach creates a separate sub-cost center that is released from many of the budgetary and operational constraints at the MWRA.

For example, the MWRA has been holding to the 1,150 staffing limit recommended by its most recent staffing study. The PMD allows new positions beyond the 1,150 to be hired. Similarly, the PMD approach also makes it clear the MWRA is not obligated to retain these employees after the project is completed.

In its proposed FY19 CEB, the MWRA has budgeted for five FTEs within the PMD. This new director’s position would be the first of these, followed by two mid-level, and two professional level staffers. Only the director position is funded for the full year, with the assumption being others would come on board at some point mid-year.

The Board requested a proposed organizational chart for the PMD, which Executive Director Laskey indicated he would bring provide sometime this summer after the new director is on board.

As part of its annual budget review, MWRA staff has informed the Advisory Board that current projections for the PMD staffing level will be 15 FTEs at its peak. To put this in perspective, the Boston Harbor Project had 45 FTEs in its heyday. It’s important to note, however, this number may change based on the needs determined as the project progresses, and the timing of any new hires beyond FY19 is still to be determined.

MWRA staff provided the Board of Directors with its annual update on the various Community Assistance Programs it manages:

MWRA provides $724 million in interest-free loans for 45 communities receiving water service from the system. To date, 42 have participated borrowing $370.5 million in loans to finance 407 local projects. Communities repay the loans over ten years.

Acting upon a recommendation of the Advisory Board, the MWRA also dedicates $100 million in interest-free loans available to assist communities in efforts to fully replace lead service lines. Each community can develop its own program, tailored to its local circumstances. Six communities have participated, using $7.5 million, with two more communities finalizing their local programs and applying for Lead Loans.

The I/I local program provides $460.75 in grants and loan funds to 43 communities receiving sewer service from the MWRA. All 43 communities participate, using $352 million to fund 541 local sewer rehabilitation projects over 25 years. The remaining funds are approved for distribution before “sunsetting” in FY25. The Proposed FY19 CIP includes two new phases for the I/I program, each funded at $60 million for a total of $120 million. By comparison, the two most recent phases totaled $160 million. Recently, both the Operations Committee and the Executive Committee of the Advisory Board discussed these proposed new phases in great detail. The Executive Committee voted to include two recommendations in this year’s Integrated Comments and Recommendations:

On behalf of its communities, the Advisory Board thanks the MWRA for continuing its commitment to cities and towns through providing these important programs to support local infrastructure projects.

Imagine flow at Deer Island suddenly changing from 335 million gallons per day to zero. The morning after yet another heavy storm on March 13, Deer Island experienced just this during a temporary power outrage shortly after 8:30 am. MWRA staff briefed the Board on its handling of the unexpected outage. Following protocol, the Authority ran emergency generators in parallel during the snowfall while the plant was fully operational. Unfortunately, it was only after the storm ended and the generators were not online that an area-wide power outage affected the facility. MWRA employees skillfully coordinated to get the first pumps running within 25 minutes of the outage. Adding to complications in the matter was the failure of the process instrumentation and control system (PICS), making it nearly impossible to see what was going on inside the plant while trying to restart it. Nevertheless, MWRA staff managed the situation to prevent any SSOs, CSOs, or raw sewage from being released during the event. From the Advisory Board and its communities – thank you to MWRA staff for their quick actions on this unexpected power outage.

The Board was presented with a slideshow of storm impacts to MWRA facilities, as well as flooding throughout the Boston Harbor Islands. Facilities have been retrofitted with sea level rise in mind, though the aggressive storms continue to test their resiliency.

Not yet approved – check back soon!